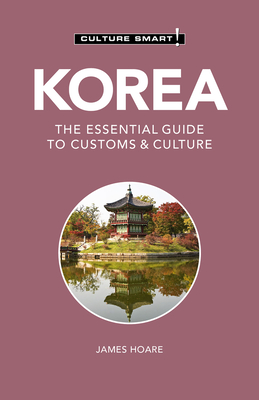 This is book number 111 in the Culture Smart! series.

Divided along the 38th parallel, modern Korea is the subject of two very different political, social, and economic experiments. Today the military might of the Marxist-Leninist North confronts the soft power and prosperity of the uber-capitalist South. Yet family and cultural ties bind the peoples of both Koreas, and reunification remains a cherished goal.

Culture Smart! Korea helps you to navigate your way through the complexities of life in these non-identical twin societies, where, even in the affluent westernized South, sensitive issues can cause misunderstanding. By introducing visitors to the Koreans at home and at work, their customs, attitudes and values, this book paves the way for an incomparably more engaging experience, whatever your reason for traveling.

James Hoare spent over thirty years in the British Diplomatic Service, with postings to Seoul and Beijing. His last job was Chargé D Affaires in Pyongyang, North Korea, where he established the British Embassy. He has a Ph.D. in East Asian history and has written extensively on China, Japan, and the two Koreas. Since retirement, he has become a regular radio and television commentator on Korea. He also teaches at the School of Oriental and African Studies, University of London. His numerous books and articles about East Asia, include Embassies in the East: The Story of the British and Their Embassies in China, Japan and Korea from 1859 to the Present (1999), and, with his wife, Susan Pares, North Korea in the 21st Century: An Interpretative Guide (2005), and an edited three-volume collection, Critical Readings on North and South Korea (2013).