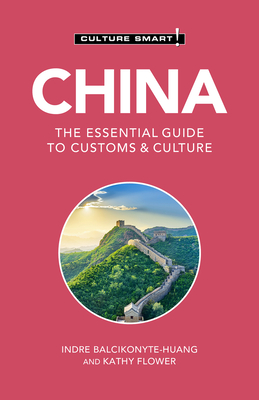 This is book number 113 in the Culture Smart! series.

Don't just see the sights— get to know the people.

For thousands of years, the Chinese believed that they had created a perfect social system, based on Confucian values and tempered by the Mandate of Heaven. Dynasties came and went, but the essence of being Chinese remained essentially unchanged until the twentieth century. Since then, change has taken place in Chinese society at unprecedented speed, as the country first experienced the turmoil of civil war and revolution before emerging on to the world stage as a global superpower.


This thoroughly updated edition of Culture Smart! China puts these changes into historical context, explains deep-seated cultural attitudes, and guides you through the maze of unfamiliar social situations, in order to help you discover for yourself the pragmatism, genius, warmth, and humanity of this extraordinary country and its people.

Indre Balcikonyte-Huang was born in Vilnius, Lithuania. She has a Bachelor s degree in Chinese with Economics from the School of Oriental and African Studies, University of London, and a Master’s degree in Modern and Contemporary Chinese Literature from Fudan University in Shanghai. Fluent in Mandarin, Indre has lived in China for more than ten years. Previously responsible for communications at a cross-border consultancy helping Western companies enter the Chinese market, she is now an independent translator, writer, and researcher. She currently lives in central Shanghai with her Shanghainese husband and son.

Kathy Flower has worked in the UK and China as a BBC radio producer, TV presenter, scriptwriter, teacher, and trainer. She spent four years with the British Council in Paris, and was co-presenter of an English-language teaching series on French TV. This led her to Beijing, where she presented China s first major English-language teaching series, Follow Me, on Chinese TV. She became known to hundreds of millions of enthusiastic Chinese viewers as Fay-lau-ah laoshi, or Teacher Flower. Back in London she joined BBC World Service Radio. Kathy has returned to China many times to work and travel. She now teaches international students, including many young Chinese enrolled at British universities, and lives in Hampshire and southern France.

"...the perfect introduction to the weird, wonderful and downright odd quirks and customs of various countries." —Global Travel​