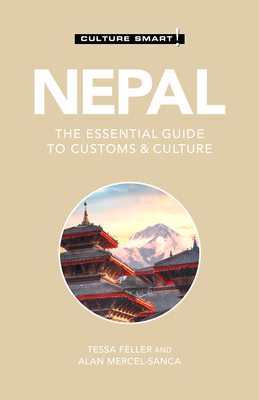 This is book number 116 in the Culture Smart! series.

Nestling in the foothills of the Himalayas, Nepal is a land of contrasts and incongruities not least in the variety of its cultural, ethnic, and religious weave. The Nepalese attitude to life is essentially religious. Hindu and Buddhist values predominate and help to maintain social harmony despite the divisions between rich and poor, urban and rural, highlands and lowlands.

Culture Smart! Nepal sets out to explain the complexities of Nepalese life, from home to business, to the marketplace. It tells you what to expect, and provides insights that will help you to go beyond friendly smiles and turn your visit into an enlightening and rewarding experience.

Tessa Feller studied German and Spanish at Edinburgh University before training as a teacher and translator. She has worked in several countries, including Austria, Russia, and Germany, where she is now based. She lived in Nepal for three years when her husband was posted there with the German Development Service (Deutscher Entwicklungsdienst). Her youngest son was born in Kathmandu.

Alan Mercel-Sanca graduated in History at the University of Kent. He is an artist who has exhibited in New York and is cited in Kennedy Publications Best of Worldwide Charcoal, Pastel & Pencil Artists. A frequent visitor to Nepal, Alan is the CEO of the UK Nepal Friendship Society, an organization that aims to protect and promote the various cultures that exist within Nepal through interrelated projects and activities in both countries. In 2015 he directed the UKNFS contribution to the Britain Nepal Bicentenary art exhibition. He has facilitated, through the English FA, a friendly international football match between the two countries, and led an initiative to boost the British Nepali community s participation in the UK s democratic processes by engaging the main UK Nepali community organizations with Parliament in Westminster and the Welsh Assembly.