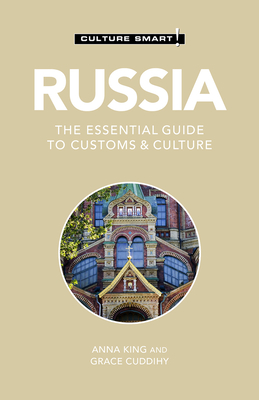 This is book number 112 in the Culture Smart! series.

Discovering the Russian soul is like opening a matryoshka, a Russian doll, revealing the many layers. The Russian orthodox religion is unique; Russian history is tragic; and the people are unpredictable. Russia s military and political power, as well as the rich contribution of its art and culture, is the result of an inner dynamic not always understood by outsiders.

Culture Smart! Russia sets out to help you to become a more perceptive traveler, and to make your trip more personally fulfilling. It explores the connections between Russia s turbulent past and its paradoxical present; it describes present-day values and attitudes, and offers practical advice on what to expect and how to behave in different social circumstances.

Grace Cuddihy is a translator and editor who has lived in Moscow, Ukraine, and in Russia s Mari-El Republic. While completing a degree in History and Russian at Trinity College Dublin, she won a scholarship to Moscow State University. In Moscow she worked as a governess for Russian families, as an English teacher, and for three years as an editor at The Moscow Times newspaper. She was a frontline editor and translator at the 2016 St. Petersburg International Economic Forum. Grace has worked as a consultant for a British company in Moscow, producing reports and analysis on the Russian education market, and for a number of Russian companies, and has run translation workshops for the Russian Central Bank. She continues to work as a freelance translator and editor for organizations such as Skoltech, the Strelka Institute, and the Russian Academy of Sciences. She is currently pursuing a Master s degree in Russian and Post-Soviet Politics at University College London s School of Slavonic and East European Studies.

Anna King is a Russian-born business development consultant specializing in cross-cultural issues, negotiation practices, and conflict management. She speaks seven languages and has an M.Phil. degree from Cambridge University. Anna has worked with key government and decision makers in Britain and across the CIS. She has also interpreted for high-level government visits to the UK and for senior ministerial meetings at the EU in Brussels. Having worked in business development for a number of years for two major British corporations, she is now managing director of the British-based consultancy 3C Negotiations, and is the author of numerous articles and two books on cross-cultural communications.