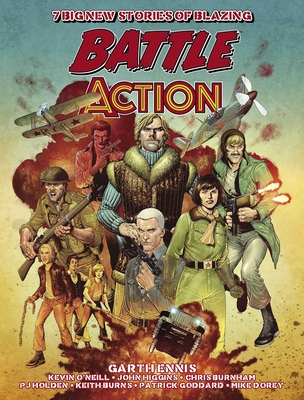 
On Our Shelves Now at:
A brand-new collection of hard-hitting war stories from modern master Garth Ennis (Preacher, The Boys), drawn by a host of top talent including Kevin O'Neill (League of Extraordinary Gentlemen), and Chris Burnham (Batman).

Two of the greatest British comics of all time join forces- and bring you seven new stories of blazing Battle Action!

Writer Garth Ennis (Preacher, The Boys) presents his own take on the classic characters of Battle and Action. Ace fighter pilot Johnny Red battles Skreamer of the Stukas on the nightmarish Russian front. Veteran leader The Sarge and his section face hell in the brutal Italian campaign. Wheeler-dealer Crazy Keller drives for his life as World War Two comes to its bloody conclusion. Lethal British agent Dredger doles out justice- of a kind- on the streets of 1980s London.

All these and more in this high-octane collection of fantastic new combat strips, featuring scripts by Ennis and art by some of the biggest names in modern comics, including Kevin O’Neill (Nemesis The Warlock, League of Extraordinary Gentlemen), Chris Burnham (Batman) and John Higgins (Watchmen, Dreadnoughts). Get your front-row seats to the front line, as only the legendary Battle Action can deliver!
Garth Ennis began his career on Crisis, 2000AD and the Judge Dredd Megazine, for which he wrote Judge Dredd, Strontium Dogs, True Faith and others. Outside of the Galaxy’s Greatest Comic he is known for Preacher, The Boys, Hitman, The Punisher and a great many war comics- including War Stories, Battlefields, Out Of The Blue, The Stringbags and Sara.

Kevin O’Neill is a 2000 AD legend. From working as an art assistant on the very first prog, he quickly became involved in the creative side of the comic, co-creating classics like A.B.C. Warriors, Bonjo From Beyond The Stars, Metalzoic and Nemesis the Warlock. O’Neill has also written for the comic on strips including Dash Decent, Future Shocks, One-Offs, Tharg the Mighty, and has illustrated Future Shocks, Judge Dredd, M.A.C.H. 0, One-Offs, Ro-Busters, Ro-Jaws’ Robo-Tales, Tharg the Mighty and Torquemada. Outside the Galaxy’s Greatest Comic, O’Neill was briefly notorious as the only artist ever to have his work rejected wholesale by the Comics Code Authority! Happily, his notoriety quickly became fame and acclaim, as his work on strips like Marshal Law and most recently The League of Extraordinary Gentlemen have raised him to a very high profile. O’Neill’s other work includes Green Lantern and Batman.

John Higgins is a multi-talented 2000 AD artist and writer; as well as scripting a Future Shock and Judge Dredd, Higgins has illustrated Chopper, Freaks, One-Offs, Tharg the Mighty and Time Twisters. His work outside the Galaxy’s Greatest Comic is also highly respected, and he has contributed to some of the most important series of recent times, including working as a colourist on the modern superhero classic Watchmen, and on Vertigo’s Animal Man, Hellblazer and Pride and Joy.

Patrick Goddard’s clean art style has graced many strips in the Galaxy’s Greatest Comic. Co-creator of the Megazine series Wardog, he has penciled Judge Dredd, Mean Machine, Middenface McNulty, Sinister Dexter and took over the art duties on Savage from Charlie Adlard.

Paul J. Holden has illustrated The 86ers, Judge Dredd, Tharg’s Future Shocks, Rogue Trooper and Johnny Woo for 2000 AD and the Judge Dredd Megazine. P.J. lives and works in Belfast, and is married with two children.

Keith Burns is a member of the Guild of Aviation Artists, and has previously worked on Rat Pack for Battle, and the Johnny Red mini-series.