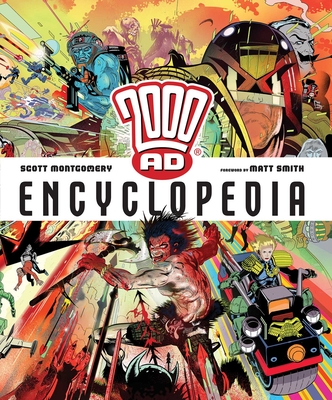 
In Stock—Click for Locations
From A.B.C. Warriors to Zenith! Meticulously researched and compiled for comics fans everywhere, the 2000 AD Encyclopedia is the essential fact compendium to the Galaxy’s Greatest Comic!

What are the essential Judge Dredd stories? In which progs did The Ballad of Halo Jones run? What year was the first appearance of Nemesis the Warlock? Just who are the Thrillsuckers? Look no further, Earthlets! Every strip and major character from 2000 AD’s trailblazing 45 year history is catalogued and detailed, accompanied by stunning artwork and illustrations. With this show-stopping hardcover collection, must-read characters and storylines from across the cosmos are at your fingertips!
Since 1994 Scott Montgomery’s professional writing has encompassed journalism, comic scripts, prose fiction and radio comedy. For 2000 AD and Judge Dredd Megazine he wrote the history of Rogue Trooper in 1996, updated in 2006 - and compiled The Dredd Files – a detailed, monthly analysis of the early years of the Judge Dredd strip - which stood him in good stead for writing the 2000 AD Encyclopedia. He worked on the editorial teams of the Dandy and then Commando comics for publisher DC Thomson & Co. Ltd from 2004 till 2016 and has also scripted the iconic Oor Wullie and The Broons comic strips for the Sunday Post newspaper. Other credits include newsstand titles such as Beano, Thunderbirds Are Go, Doctor Who Magazine,The People’s Friend, Yours Fiction, My Weekly, Sunday Mail, The List and others – as well as contributing material to five series of BBC Radio Scotland’s topical comedy show Watson’s Wind-Up, which starred Jonathan Watson. Scott’s previous publications include The Long, Big Kiss Goodbye– an original crime novella for Telos and a puzzle book -James Bond Word Searches: Unofficial and Unauthorised,published by Amazon.

Matthew Smith was employed as a desk editor for Pan Macmillan book publishers for three years before joining 2000 AD as assistant editor in July 2000 to work on a comic he had read religiously since 1985. He became editor of the Galaxy’s Greatest in December 2001, and then editor-in-chief of the 2000 AD titles in January 2006. He lives in Oxford.
“…the 2000 AD Encyclopedia is noteworthy for its effort to catalog the many strips and characters featured in Rebellion’s long-running British science fiction comics, for the information and enjoyment of new and veteran readers.” - Medium.