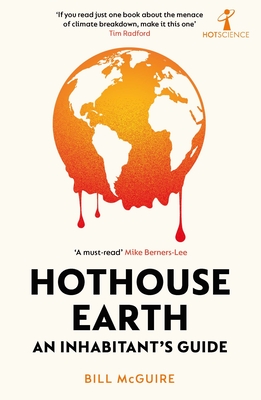 
On Our Shelves Now at:
"Volcanologist McGuire zeroes in on 'the core issues at the heart of the climate emergency' in this urgent survey. ... This blunt and sobering look at climate change packs a punch."--Publishers Weekly

"It's a paradox but this was one of the most chilling books I've read this year. It's the definitive guide to where we're heading ..." ANTHONY HOROWITZ, New York Times bestselling author of The Word Is Murder and The Sentence Is Death

We inhabit a planet in peril. Our once temperate world is locked on course to become a hothouse entirely of our own making.

Hothouse Earth: an Inhabitant's Guide provides a post-COP26 perspective on the climate emergency, acknowledging that it is now practically impossible to keep this side of the 1.5 C dangerous climate change guardrail. The upshot is that we can no longer dodge the arrival of a disastrous, all-pervasive climate breakdown that will come as a hammer blow to global society and economy.Bill McGuire, Professor of Geophysical and Climate Hazards, explains the science behind the climate crisis, painting a blunt but authentic picture of the sort of world our children will grow old in, and our grandchildren grow up in; a world that we catch only glimpses of in today's blistering heatwaves, calamitous wildfires and ruinous floods and droughts.Bleak though it is, the picture is one we must all face up to, if only to spur genuine action - even at this late stage - to stop a harrowing future becoming a truly cataclysmic one.

"This accessible and authoritative book is a must-read for anyone who still thinks it could be OK to carry on as we are for a little bit longer, or that climate chaos might not affect them or their kids too badly." MIKE BERNERS-LEE, author of There is No Planet B: A Handbook for the Make or Break Years


Bill McGuire is Professor Emeritus of Geophysical and Climate Hazards at University College London, a co-director of the New Weather Institute, and was a contributor to the 2012 IPCC report on climate change and extreme events. His books include A Guide to the End of the World: Everything you Never Wanted to Know and Waking the Giant: How a Changing Climate Triggers Earthquakes, Tsunamis and Volcanoes. He writes for many publications including The Guardian, The Times, The Observer, New Scientist, Focus and Prospect, and blogs for the New Weather Institute, Scientists for Global Responsibility, Extinction Rebellion and Operation Noah.