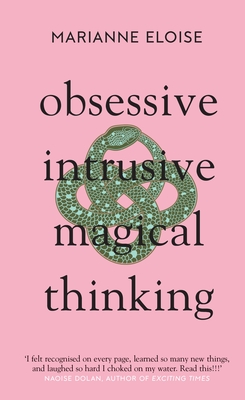 
Not On Our Shelves—Ships in 1-5 Days
Obsessive was, still is, my natural state, and I never wondered why. I didn't mind, didn't know that other people could feel at peace. I always felt like a raw nerve, but then, I thought that everyone did.

Writer and journalist Marianne Eloise was born obsessive. What that means changes day to day, depending on what her brain latches onto: fixations with certain topics, intrusive violent thoughts, looping phrases. Some obsessions have lasted a lifetime, while others will be intense but only last a week or two.

Obsessive, Intrusive, Magical Thinking is a culmination of a life spend obsessing, offering a glimpse into Marianne's brain, but also an insight into the lives of others like her. From death to Medusa, to Disneyland to fire, to LA to her dog, the essays explore the intersection of neurodivergence, fixation and disorder, telling the story of one life underpinned and ultimately made whole by obsession.

Marianne Eloise is a writer and journalist. She covers topics like TV, film, digital culture, neurodiversity, wellness and alternative music, for outlets including The Cut, the New York Times, Courier, Vulture, i-D, Guardian and more.