Shearwater: A Bird, an Ocean, and a Long Way Home (Hardcover) 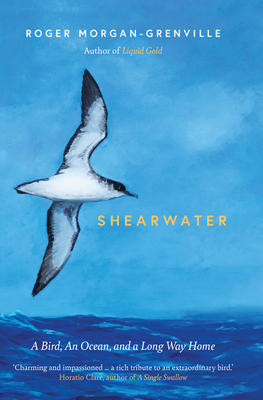 Shearwater: A Bird, an Ocean, and a Long Way Home (Hardcover)

'Charming and impassioned ... a rich tribute to an extraordinary bird.' Horatio Clare, author of A Single Swallow and Heavy Light

A very personal mix of memoir and natural history from the author of Liquid Gold.

Ten weeks into its life, a Manx shearwater chick will emerge from its burrow and fly 8,000 miles from the west coast of the British Isles to the South Atlantic. It will be unlikely to touch land again for four years.

Part memoir, part homage to wilderness, Shearwater traces the author's 50-year obsession with one of nature's supreme travellers. In the finest tradition of nature writing, Roger Morgan-Grenville, author of Liquid Gold - described by Mary Colwell (Curlew Moon) as 'a book that ignites joy and warmth' - unpicks the science behind its incredible journey; and into the story of a year in the shearwater's life, he threads the inspirational influence of his Hebridean grandmother who instilled in him a love of wild places and wild animals.

Roger Morgan-Grenville was a soldier in the Royal Green Jackets from 1978-86, serving all over the world. In 1984-85, he led the first expedition that successfully retraced Sir Ernest Shackleton's escape across the sub-Antarctic island of South Georgia. After leaving the British army, he worked in, and then ran, a small family company importing and selling kitchenware. In 2007-08, he helped to set up the UK charity Help for Heroes, and in 2020 he was a founding member of the conservation charity, Curlew Action. He jointly set up a roving cricket team in 1986 (The Winchester Hunters) and lives in West Sussex. This is his fifth book. His previous title, Liquid Gold: Bees and the Pursuit of Midlife Honey, is also published by Icon.
For This Book...
Staff Pick