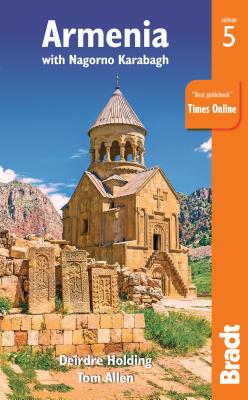 
Special Order—Subject to Availability
This new, thoroughly updated 5th edition of Bradt's Armenia remains the only standalone guide available to this mountainous post-Soviet republic at the crossroads of Europe. Packed with detailed background information and invaluable practical advice, Bradt's Armenia remains the essential choice for anyone travelling to this beautiful country. New for this edition is coverage of the gastronomic revival in Yerevan, increased coverage of local music and nightlife, and expanded sections on protected areas, particularly the National Parks. Also new is information on the Transcaucasian Trail, hitch-hiking as a mode of transport, volunteering opportunities for longer-term travellers, and Yerevan as a popular base for 'digital nomads' and young diaspora Armenians. In addition, there is a wealth of new details for adventure travellers, including guidance on hiking and trekking, camping, mountain biking, cycle touring, rock climbing, off-road driving, and winter sports including ski touring. New long-distance trails are covered, too.Bradt's Armenia provides all of the information needed for a successful trip and covers all the most popular sights as well as those off-the-beaten track, including Dilijan National Park and the stunning forested mountains of Tavush, a region which is undergoing a renaissance as a place to explore and reconnect with nature; Areni village, one of the birthplaces of wine 6,000 years ago; and Vayots Dzor, the 'valley of woes', whose side valleys are abundant with wildlife-spotting opportunities. Tatev village and proposed National Park are included, as are the Orbelian caravanserai and other remnants of the ancient Silk Road trading route network that once criss-crossed the Caucasus regionRich in both history and spectacular scenery, Armenia is a truly captivating country. Whether seeking out ancient monasteries dotted within dramatic landscapes, wandering through one of Yerevan's impressive museums or admiring the intricate stone carvings at Noratus, you'll find opportunities to delve into this nation's past at every turn. Add to this the welcoming locals, superb hiking possibilities and abundant bird life, and you'll soon discover why Armenia is worth more than just a fleeting visit.
Deirdre Holding and her husband first went to Armenia in 2001, on holiday. 'We were enthralled by the country: its landscapes, the wild flowers, the many medieval monasteries and churches, its unique alphabet, the welcome we received, its complex history at so many crossroads - geological, historical, political and religious. But we were also frustrated by the lack of information in Armenia itself, many times bewailing the absence of a practical and informative guidebook. 'So when, after their return, Nick was asked to write the first Bradt guide to Armenia he accepted willingly. 'Having originally visited Armenia as tourists and not being members of the Armenian diaspora has meant being able to write about the country objectively, knowing which aspects need particular explanation for the general tourist, but covering the country in enough detail to be useful also to members of the Armenian diaspora.''Armenia has been one of the things which has helped me to cope with the enormous gap left in my life after Nick's death' says Deirdre. 'Over the years I have seen huge changes in Armenia - the vastly improved condition of the roads, the expansion in tourist infrastructure, the advances on the technological side as Armenia leap-frogged from an antiquated and cumbersome Soviet era telephone system to one of the most advanced digital systems, the increased availability of active pursuits such as hiking, cycling and wildlife-watching which simply did not exist when I first visited. Fortunately many of the best things in Armenia do not change: the hospitality of the people, the wonderful quality of seasonal fruit and vegetables, its magnificent landscapes and the abundant ancient sites, both prehistoric and medieval. I continue to find the country endlessly fascinating.'This edition has been updated by Tom Allen, who first arrived in Armenia in early 2008 having pedalled there from England on a bike and who is now settled in Yerevan with his wife Tenny. In the years since he has learned the Armenian language and explored every corner of the country. The dramatic landscapes and heart-warming hospitality of the Caucasus inspired him to create a long-distance walking route across the region, and in 2016 he launched an expedition to design and map the Armenian section of what would become the Transcaucasian Trail. Tom's journey places him well to uncover and communicate aspects of the country that would otherwise be missed, while his global perspective on travel ensures that such advice remains as objective as possible.