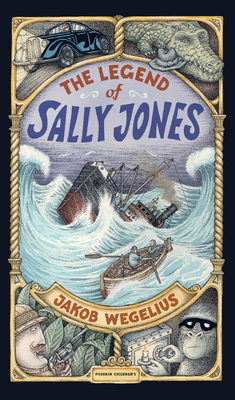 
On Our Shelves Now at:
Another gripping Sally Jones adventure - the gorgeously illustrated,  graphic novel prequel to The Murderer's Ape

This is the story of a gorilla like no other.

This is the story of a fantastic voyage across the world, from the Congolese rainforest to the grand bazaar of Istanbul, from Borneo to London, Singapore and beyond. The story of a mysterious jewel thief and a sad sailor with a heart of gold. A story of friendship and adventure on the high seas.

This is the story of Sally Jones.
Jakob Wegelius is a Swedish writer and illustrator who lives and works in the small village of Mörtfors. In Sweden, he was awarded the August Prize for Best Children's Book and the Nordic Council Children and Young People's Literature Prize for The Murderer's Ape, which is also an International Youth Library White Raven selection. The Legend of Sally Jones won Sweden's August Prize for Best Children's Book.

Peter Graves is a translator from the Scandinavian languages, known in particular for his translations of novels by Selma Lagerlöf. He has been awarded the Swedish Academy’s Translation Prize for his work.