To the One I Love the Best (Paperback) 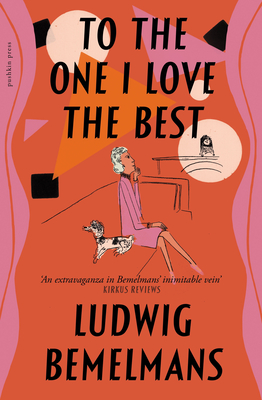 To the One I Love the Best (Paperback)


Coming Soon—Pre-Order Now
A witty and charming account of the wildly entertaining Elsie de Wolfe in 1950s Hollywood, recounted by her dear friend, the beloved creator of Madeline

Ludwig Bemelmans’ charming intergenerational friendship with the late-in-life “First Lady of Interior Decoration” provides an enormously enjoyable nostalgia trip to the sun-soaked glamour of Los Angeles, where de Wolfe surrounded herself with classic movie stars and a luminous parade of life's oddities.

With hilarity and mischief that de Wolfe would no doubt approve, To the One I Love the Best lifts the curtain on 1950s Hollywood--a bygone world of extravagance and eccentricity, where the parties are held in circus tents and populated by ravishing movie stars.

Bemelmans, who was working at MGM, had originally come to the California home of de Wolfe just for cocktails but by the end of the night, he was firmly established as a member of the family: given a bedroom in their sumptuous house, invitations to the most outrageous parties in Hollywood, and the friendship of the larger-than-life woman known to her closest friends simply as 'Mother'.

To the One I Love the Best (which refers to de Wolfe’s dog) is a touching tribute to a fabulously funny woman and an American icon.

Be pretty if you can, be witty if you must, but be gracious if it kills you.  - Elsie de Wolfe
Ludwig Bemelmans (1898-1962) was an Austrian-born American writer and illustrator of books for children and adults. He travelled to American in 1914, at the age of sixteen, and worked for three years in the dining halls of what he called, in his autobiographical works, the Hotel Splendide. In 1926, he quit working in hotels to become a full-time cartoonist and made frequent contributions to the New Yorker, Vogue and Town and Country. He is perhaps most well-known as the author of the beloved Madeline books.