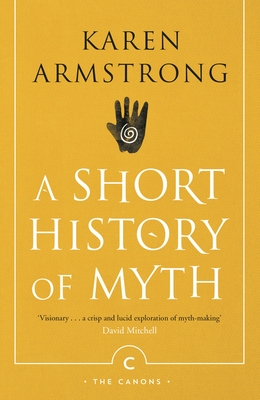 As long as we have been human, we have been mythmakers. In A Short History of Myth, Karen Armstrong holds up the mirror of mythology to show us the history of ourselves, and embarks on a journey that begins at a Neanderthal graveside and ends buried in the heart of the modern novel.

Surprising, powerful and profound, A Short History of Myth examines the world's most ancient art form - the making and telling of stories - and why we still need it. The Myths series brings together some of the world's finest writers, each of whom has retold a myth in a contemporary and memorable way. Authors in the series include Karen Armstrong, Margaret Atwood, A.S. Byatt, David Grossman, Natsuo Kirino, Alexander McCall Smith, Philip Pullman, Ali Smith and Jeanette Winterson.
Karen Armstrong is one of the world's leading commentators on religious affairs, and has been described by the Financial Times as 'one of our best living writers on religion'. She spent seven years as a Roman Catholic nun in the 1960s, before leaving for a career as a writer and broadcaster. Armstrong is the best-selling author of over 20 books and a passionate campaigner for religious liberty, and has addressed members of the United States Congress and the Senate and has participated in the World Economic Forum.