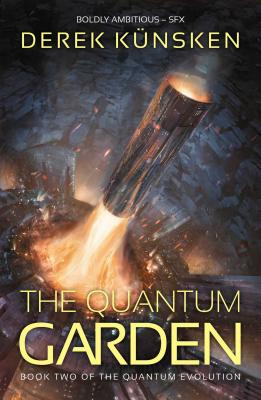 This is book number 2 in the The Quantum Evolution series.

Days ago, Belisarius pulled off the most audacious con job in history. He’s rich, he’s back with the love of his life, and he has the Time Gates, the most valuable things in existence. Nothing could spoil this… except the utter destruction of his people and their world. To save them, he has to make a new deal with the boss he just double-crossed, travel back in time and work his quantum magic once again.If he can avoid detection, dodge paradox and stay ahead of the eerie, relentless Scarecrow, he might just get back to his own time alive.
Derek Künsken has built genetically engineered viruses, worked with street children and refugees in Latin America, served as a Canadian diplomat, and, most importantly, taught his son about super-heroes and science. His short fiction has appeared in Analog Science Fiction and Fact, Beneath Ceaseless Skies and multiple times in Asimov’s Science Fiction. His stories have been adapted into audio podcasts, reprinted in various Year’s Best anthologies, and translated into multiple languages. They have also been short-listed for various awards, and won the Asimov’s Readers’ Award in 2013.
“Künsken has a wonderfully ingenious imagination.” – Adam Roberts, Locus
— Adam Roberts

“Technology changes us – even our bodies – in fundamental ways, and Kunsken handles this wonderfully” -- Cixin Liu
— Cixin Liu