Why I No Longer Write Poems: [Bilingual Georgian-English] (Paperback) 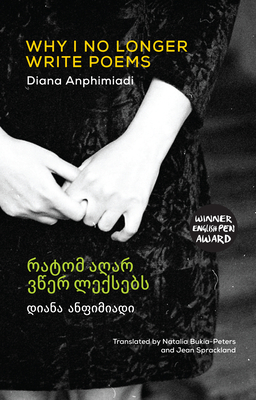 Why I No Longer Write Poems: [Bilingual Georgian-English] (Paperback)

A boldly inventive selection of collaborative translations from one of the most widely revered Georgian poets of her generation.

Diana Anphimiadi's award-winning work reflects an exceptionally curious mind and glides between classical allusions and surreal imagery. She revivifies ancient myths and tests the reality of our senses against the limits of sense. Prayers appear alongside recipes, dance lessons next to definitions. Her playful, witty lyricism offers a glimpse of the eternal in the everyday.

The poems in this selection have been collaboratively translated into English by the leading Georgian translator Natalia Bukia-Peters and award-winning British poet Jean Sprackland. A chapbook selection of their translations of Anphimiadi's work, Beginning to Speak, was published in 2018 and praised by Adham Smart in Modern Poetry in Translation for capturing the 'electricity of Anphimiadi's language' which 'crackles from one poem to the next in Bukia-Peters and Sprackland's fine translation'.