Global Governance and the New Wars: The Merging of Development and Security (Paperback) 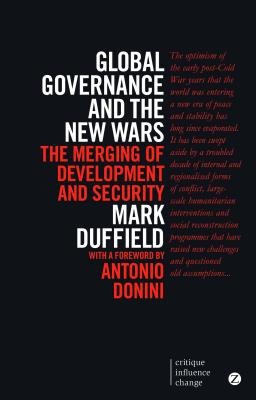 Global Governance and the New Wars: The Merging of Development and Security (Paperback)


In Stock—Click for Locations
Mark Duffield is Emeritus Professor at the Global Insecurities Centre, University of Bristol, UK. He has taught at the Universities of Khartoum, Aston and Birmingham and held Fellowships and Chairs at Sussex, Leeds and Lancaster. Mark is currently a member of the Scientific Board of the Flemish Peace Institute, Brussels and a Fellow of the Rift Valley Institute, London and Nairobi. Outside of academia, during the 1980s, he was Oxfam's Country Representative in Sudan. Duffield has advised government departments including DFID, EU (ECHO), the Swedish Ministry of Foreign Affairs, and the Swedish International Development Cooperation Agency (SIDA); also NGOs such as CAFOD, International Alert, Comic Relief and Oxfam; and UNICEF, UNOCHA, UNDP and UNHCR. His books include Global Governance and the New Wars: The Merging of Development and Security (2001) and Development, Security and Unending War: Governing the World of People (2007).