Batman: Curse of the White Knight The Deluxe Edition (Hardcover) 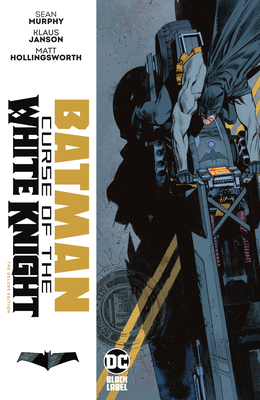 Batman: Curse of the White Knight The Deluxe Edition (Hardcover)


On Our Shelves Now at:
Ancient curses are awoken and timeless secrets are revealed in this Eisner Award nominated and explosive sequel to the critically acclaimed blockbuster Batman: White Knight from writer/artist Sean Murphy!

The Joker recruits Azrael to help him expose a shocking secret about the Wayne family's legacy--and run Gotham City into the ground! As Batman rushes to protect the city and his loved ones from danger, the mystery of his ancestry unravels and Batman begins to question everything he thought he knew about himself and his place in Gotham.

With Gotham City's identity and institutions hanging in the balance, Barbara Gordon decides to take matters into her own hands -- but will her rogue actions play right into The Joker's plans? After tragedy strikes, Renee Montoya steps into the fray to lead the GTO and restore order to the chaos that is quickly consuming Gotham City. Lightning-quick pacing and an all-star cast of Gotham's heaviest hitters will keep you on the edge of your seat until the breathtaking finale of this second installment of the White Knight saga!

Collects Batman: Curse of the White Knight #1-8 and Batman: White Knight Presents Von Freeze #1.
After breaking into the comics industry at a young age, Sean Murphy made a name for himself in the world of indie comics before joining up with DC Comics for such titles as Punk Rock Jesus, Batman/Scarecrow: Year One, Teen Titans, Hellblazer, Joe the Barbarian (with Grant Morrison), and the miniseries American Vampire: Survival of the Fittest. He also wrote and illustrated the original graphic novel Off Road (Oni).