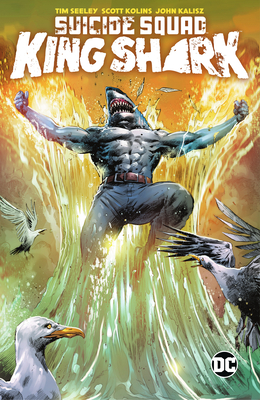 
Not On Our Shelves—Ships in 1-5 Days
The breakout star of The Suicide Squad is ready to take his place at the top of the food chain!

On leave from the Suicide Squad, King Shark and unfortunate tagalong the Defacer get swept into a mystical tournament for totemic animal spirits at the behest of King Shark’s father, the god of sharks! Now King Shark must battle brutal warriors like Queen Tiger, King Roach, Prince Nematode, Princess Peregrine, and the terrifying Man King to finally attain his destiny and make his dour dad proud!

Collects Suicide Squad: King Shark #1-6.
Tim Seeley is a comic book artist, writer, and all-around maker-upper. His past works include Grayson, Hack/Slash, Witchblade, Revival, and G.I. Joe vs. The Transformers. He has written both Green Lanterns and Nightwing for DC Comics, as well as Batman: Preludes to the Wedding.