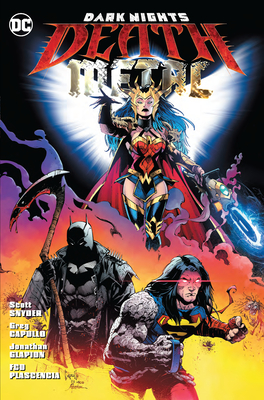 
In Stock—Click for Locations
When the Earth is enveloped by the Dark Multiverse, the Justice League is at the mercy of the Batman Who Laughs—who is reborn as the Darkest Knight!

Humanity struggles to survive in a hellish landscape twisted beyond recognition, and Wonder Woman, Batman and Superman are trapped in nightmare worlds within the Dark Multiverse! It all comes down to the Darkest Knight versus Wonder Woman, in the most metal-est DC event of all time—paving the way for the future of the DC Universe!

Collects Dark Knights: Death Metal #1-7!
Scott Snyder is a #1 New York Times bestselling writer and one of the most critically acclaimed scribes in all of comics. His works include All-Star Batman, Batman, Batman Eternal, Superman Unchained, American Vampire, and Swamp Thing. He has also been published in Zoetrope, Tin House, One Story, Epoch, Small Spiral Notebook, and other journals, and has a short-story collection, Voodoo Heart, which was published by Dial Press. He teaches at Columbia University and Sarah Lawrence University and lives in New York with his wife, Jeanie, and his son, Jack Presley.