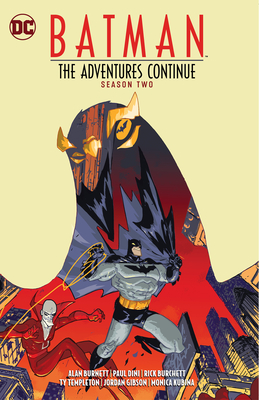 
On Our Shelves Now at:
From the visionary team behind Batman: The Animated Series and 2020’s hit comic book series Batman: The Adventures Continue comes an all-new season set in this seminal animated world!


Gotham City is changing. After Mayor Hill is killed by a mysterious assailant, Batman finds himself tracking down an ancient order that’s long been buried under the streets of Gotham: the Court of Owls. But what does this group have to gain from the death of Mayor Hill…and how can Deadman help the Dark Knight? Will the clues lead Batman to an ancient Gotham City legend?


Alan Burnett, Paul Dini, Ty Templeton, and Monica Kubina return to comics for an all-new season that picks up where the classic animated series left off.

Paul Dini is a multiple Emmy and Eisner Award-winning writer and producer who has helped redefine the legends of the DC Universe in such series as The New Batman/Superman Adventures, Batman Beyond, Krypto the Superdog, and Justice League Unlimited. In doing so, he co-created one of the most popular characters in comics in Harley Quinn, who originated as a character in Batman: The Animated Series. In comics he has authored The World's Greatest Super-Heroes, illustrated by Alex Ross. Dini has also collaborated with Chip Kidd on Batman Animated for HarperCollins.