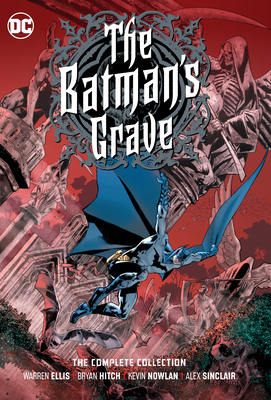 
Not On Our Shelves—Ships in 1-5 Days
The World's Greatest Detective buried alive.

Once a week, rain or shine, Alfred Pennyworth walks to a little cemetary plot on the Wayne Manor grounds. He meticulously tends to Thomas and Martha Wayne's headstones, plinths, and slabs: weeding, cleaning, polishing. But how much longer before there's another Wayne memorial to tend to? Batman's current case forces him to inhabit the mind of a murder victim with a half-eaten face—sending him on a collision course with an enemy who has infiltrated every part of Gotham. Every corner Batman turns leads him one step closer to his own grave!

In The Batman's Grave, Warren Ellis and Bryan Hitch, one of the most legendary creative partnerships of the modern age, reunite for a story about life, death, and the questions most are too afraid to ask.
Warren Ellis is a comics and graphic novel writer best known for the graphic novel series Transmetropolitan, Planetary, and The Authority. With over 35 graphic novels in print, Ellis has received numerous honors including the International Horror Guild Award for graphic narrative and being named one of Entertainment Weekly's 100 Most Creative People. Rolling Stone described his work as "more influenced by Jesus and Mary Chain than by the Justice League, while his characters fight for left-wing agendas over God and country, and kick puppies in the street."