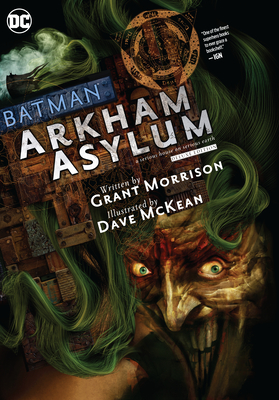 
On Our Shelves Now at:
Where all compulsions meet.

In 1920, following the death of his disturbed mother, brilliant psychologist Amadeus Arkham began the conversion of his ancestral home into a hospital for the treatment of the mentally ill.

More than half a century later, the Arkham Asylum for the Criminally Insane is a place of dismal corridors and oppressive shadows—a dark riddle in stone and timber, best left unsolved.

Within its claustrophobic walls the demented and deformed enemies of the Batman brood in padded cells and unlit cellars, dreaming of a day when they might rise up and overthrow the world of reason.

That day has finally come.

It is April 1st, and the lunatics have taken over the asylum. Led by the Joker, Arkham’s inmates issue a terrible ultimatum to the man responsible for their imprisonment.

The Batman must descend into this heart of darkness, confront his greatest foes, and face the truth of his own divided identity — or condemn himself to share their fate.


Written by legendary comics creator Grant Morrison and beautifully illustrated and restored by artist Dave McKean, this deluxe edition collects the fully painted story together with Morrison’s complete annotated script and page layouts as well as a 16-page gallery of preliminary and promotional art by McKean and an afterword by editor Karen Berger.
Writer Grant Morrison is known for his innovative work on comics from the graphic novel Arkham Asylum to acclaimed runs on Animal Man and Doom Patrol, as well as his subversive creator-owned titles such as The Invisibles, Seaguy, and WE3. Grant has also written best-selling runs on JLA, Seven Soldiers of Victory, and New X-Men, and helped to reinvent the DC Universe in The Multiversity, All Star Superman, 52, Batman, Batman & Robin and Batman, Inc.

Dave McKean has illustrated several award-winning comics, including the best-selling Batman: Arkham Asylum (written by Grant Morrison), Mr. Punch, Signal to Noise, Violent Cases (all written by Neil Gaiman), and his own Cages. His collected short stories Pictures That [Tick] won the Victoria & Albert Museum Book of the Year Award, and his short film N[eon] won overall first prize at the Clermont-Ferrand Film Festival. McKean has illustrated, photographed, and designed hundreds of CD covers, comic covers, and book covers, including the entire Sandman series. He has worked on print and film projects with John Cale, Stephen King, the Rolling Stones, Lars Von Trier and SF Said, and created ad campaigns for Kodak, Nike, BMW Mini and Smirnoff, among others. He also directed the Jim Henson Productions film MirrorMask, which he co-wrote with Neil Gaiman. McKean lives in England's Kent countryside.