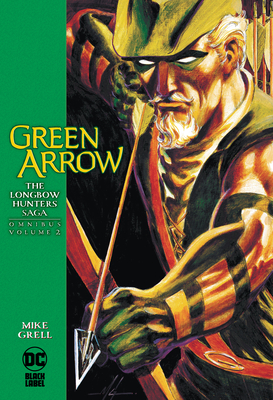 
Special Order—Subject to Availability
Oliver Queen is the Emerald Archer, Green Arrow! He's ready to fight for the people against corruption!

Oliver is faced with all new challenges in Green Arrow: The Longbow Hunters Saga Omnibus Vol. 2. While Oliver is confronting the reality of his identity—and the repurcussions of his actions—he's also being hunted by the CIA after being framed for a murder he didn't commit.

And that's not all! Oliver and Dinah find themselves traveling back to the days of Robin Hood! Find out all that happens in Green Arrow: The Longbow Hunters Saga Omnibus Vol. 2 collecting Green Arrow #51-80; Green Arrow Annual #4-6; Who's Who #14; The Brave and the Bold #1-6; Shado: Song of the Dragon #1-4; Green Arrow: The Wonder Year #1-4.

Artist Michael Jon Grell quickly made a name for himself in comics by tackling one of its most difficult assignments--the seemingly infinite universe of the Legion of Super-Heroes. From there, Grell joined Dennis O'Neil for a well-received Green Lantern and Green Arrow revival and might have become a regular contributor to the Batman office if his creation WARLORD had not taken off to become DC's most successful fantasy title ever. Grell (whose other works of note include JON SABLE, FREELANCE, STARSLAYER and GREEN ARROW) still writes the occasional BATMAN tale.