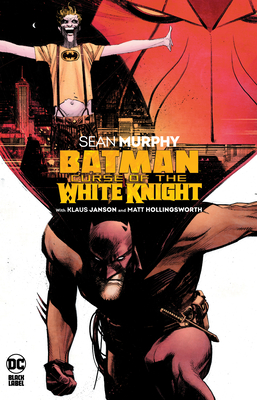 
In Stock—Click for Locations
The sword of Azrael unleashed!

The urban jungle that is Gotham City is being torn apart by the war between Batman and the Joker—a war in which the difference between hero and villain has become impossibly blurred. Now, with his do-gooding Jack Napier personality submerged beneath an ascendant Clown Prince of Crime, the Joker is ready to take that war to the next level—and his army has a new recruit.

Wielding a flaming sword and bearing the weight of hundreds of years of history on his shoulders, Azrael is a knight darker than any that Gotham has seen before. One by one, the Batman’s enemies will fall beneath his blade—and bit by bit, this new crusader will remake Gotham City into his own version of heaven on Earth.

Only Batman and his estranged allies can stop him—but the distrust between them runs deep. And when the Joker and Azrael expose the hidden history of the Wayne family, all faith in the Dark Knight may be shattered for good.

Acclaimed writer and artist Sean Murphy continues his thrilling and thought-provoking reimagining of the Batman mythos in Batman: Curse of the White Knight, a stunning sequel to his groundbreaking graphic novel Batman: White Knight. This volume collects all eight issues of the DC Black Label series as well as the Batman: White Knight Presents Von Freeze one-shot written by Murphy and illustrated by legendary comics artist Klaus Janson.
After breaking into the comics industry at a young age, Sean Murphy made a name for himself in the world of indie comics before joining up with DC Comics for such titles as Punk Rock Jesus, Batman/Scarecrow: Year One, Teen Titans, Hellblazer, Joe the Barbarian (with Grant Morrison), and the miniseries American Vampire: Survival of the Fittest. He also wrote and illustrated the original graphic novel Off Road (Oni).