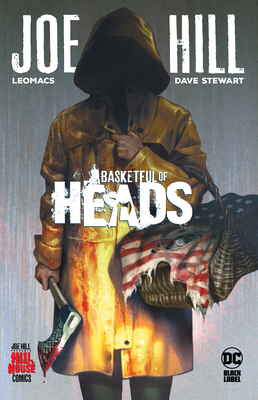 
On Our Shelves Now at:
#1 New York Times bestselling author Joe Hill asks, "With a cursed Viking axe, what can you accomplish?" and June Branch is ready to answer!

June Branch is in trouble. She's trapped on Brody Island with nowhere to run. Her boyfriend, Liam, has been kidnapped. And four bloodthirsty escaped convicts will stop at nothing to find her.

All poor June has to defend herself with is a strange Viking axe with the terrifying power to decapitate a person and leave their head still talking.

If she's going to save Liam and herself, June will have to keep a cool head...or even a whole basketful of them!

Collects issues #1-7.
Joe Hill is the #1 New York Times bestselling author of The Fireman and Heart-Shaped Box. His second novel, Horns, was made into a feature film starring Daniel Radcliffe; his third, NOS4A2, is forthcoming as a TV series from AMC. His book of short stories, 20th Century Ghosts, won the Bram Stoker Award and British Fantasy Award for Best Collection. His most recent work, Strange Weather, a collection of novellas, was published in the autumn of 2017. He earned the Eisner Award for Best Writer for his long-running comic book series Locke & Key, featuring the eye-popping art of Gabriel Rodriguez. Look for that one as a Netflix show in the not-too-distant future.