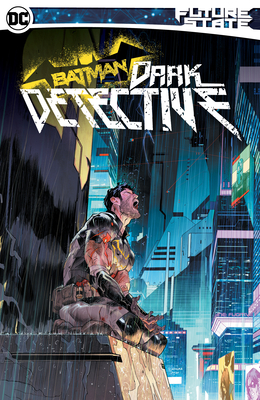 Welcome to the possible future state of Gotham. The Magistrate, a freelance military and surveillance corporation, has been hired by Gotham's leadership to turn the old city into a futuristic surveillance state free of vigilante-based crime/heroics.

Batman, horrified to see what his city was becoming, fought tooth and nail against Magistrate--and they killed him for it. Or did they? Bruce Wayne survived this assassination attempt, and has been laying low for years now trying to sort out how to beat Magistrate. The only problem? He doesn't think he can anymore. They're too big, they're too powerful. And the latest horrific revelation? They have EYES EVERYWHERE.

It's left to Batman for one last mission. Destroy their command center, expose the drones, and free the city. Whatever the cost.

DC Future State spotlights the World's Greatest Super Heroes in fresh new roles, with all-new characters taking up their iconic mantles. DC Future State features an incredible array of creative talent, combining award-winning writers and artists with new voices from the worlds of TV, movies and animation. Discover the DC Universe like never before!
Mariko Tamaki is a Canadian writer living in Oakland. Works include New York Times bestseller This One Summer and Skim with Jillian Tamaki, Emiko Superstar with Steve Rolston, and the YA novel (You) Set Me on Fire. This One Summer was the winner of Printz and Caldecott Honors in 2015 and received the Eisner Award for Best Graphic Album (New).