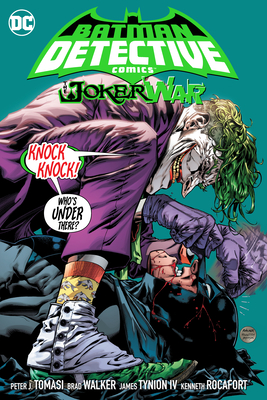 The Joker is waging a war on Batman, and he’s going to use every ghost from the Dark Knight’s past to win! As the Bat- Family reels from the recent loss of Alfred Pennyworth, no one has taken this death harder than Bruce Wayne. Alfred wasn’t just a friend and partner to Gotham’s favorite son; he was a father figure and a mentor to Bruce…and the loss has left the dark detective wounded.

The Joker knows that now is the time to strike—and strike hard.

The Clown Prince of Crime has unleashed a wave of friends, foes, and failures to attack Gotham’s protector from the inside out. First up is Harvey Dent, a.k.a. Two-Face, whose violent impulses have been amplified to deadly new heights by the Joker—unleashing a cadre of zealots known as the Church of the Two on Gotham City! But that’s not all—Lincoln March, Lucius Fox, Killer Croc, and countless more have been moved around the Joker’s diabolical chessboard to bury the Bat once and for all. Will the Dark Knight rise? Or be drowned in laughter?

Peter J. Tomasi is a New York Times bestselling author known for his current work on Superman and previous projects Batman & Robin, Superman/Wonder Woman, Detective Comics, and Batman: Arkham Knight, along with other commercially successful books such as Green Lantern Corps, Brightest Day, Emerald Warriors, and Nightwing. Over the course of his career with DC Comics--more than two decades of hit books--Peter served as a group editor, ushering in new eras for Batman, Green Lantern, and the JSA along with special projects like Kingdom Come. Peter also is the author of the creator-owned books Light Brigade (Dark Horse) with artist Peter Snejbjerg, The Mighty (Dark Horse) with Keith Champagne and artists Peter Snejbjerg and Chris Samnee, and the critically acclaimed horror/drama series House of Penance (Dark Horse) with artist Ian Bertram.