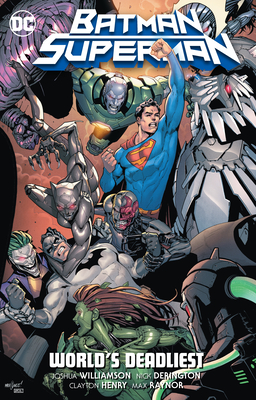 
Not On Our Shelves—Ships in 1-5 Days
Batman and Superman battle their deadliest adversaries!

In the aftermath of a deadly duel with the Batman Who Laughs, trouble abounds for the Man of Steel and the Dark Knight. From the zombie resurrection of the Bottle City of Kandor, to battling the combined might of General Zod and Ra’s al Ghul, to being turned into living bombs by the Ultra-Humanite, Batman and Superman are in over their heads, and need help in their battle against evil.

Enter a new strategy: track down the biggest baddies in the DC Universe before they can do harm to others! A villain database that the World’s Finest can use to stop problems before they happen...seems like a good idea, right? Not when the system itself turns on you! A rogue Brainiac program has infiltrated the database, and this sentient hub of all things evil has created a death trap for our heroes on the moon! To defeat the combined might of all the villains in the DCU, Steel and Batwoman join the fray to try to help save the day—but will this ultra-team-up be enough?

And that’s not all—a ticking-time-bomb Solomon Grundy and the deranged fifth-dimensional antics of Mr. Mxyzptlk and Bat-Mite also plague Batman and Superman in this epic battle-royal of a book!

This villainous volume collects Batman/Superman #7-15 and Batman/Superman Annual #1. Returning writer JOSHUA WILLIAMSON (The Flash, Justice League vs. Suicide Squad) is joined by the epic artistic talents of NICK DERINGTON (Doom Patrol, Future State: The Next Batman), CLAYTON HENRY (The Flash), MAX RAYNOR (The Terrifics), and more!
Joshua Williamson lives in Portland, Oregon. His career as a comics writer kicked off in 2007, and since then he has done a number of books for Shadowline, Image, Desperado Publishing, Kick Start, and DC Comics. He has written the Uncharted limited series based on the bestselling video game, Voodoo, and Marvel's Illuminati and Red Skull. He is currently writing The Flash and Batman/Superman for DC Comics.