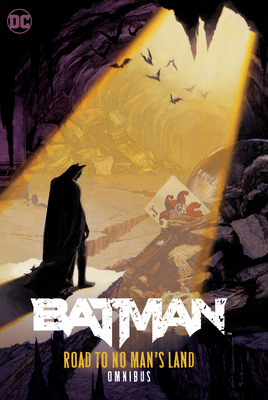 
Backordered
Batman: Road to No Man's Land Omnibus is a gripping and heartwrenching collection masterfully brought together by Chuck Dixon.

Azrael is back in Gotham, but he's not the only one. Bringing back Bane with him in an attempt to get him in custody, Azrael's plan is halted when an earthquake provides the perfect escape for Bane.

Catwoman's world begins to unravel as the Angle Man is back in Gotham--his mind set on murder.

Batman and his allies are faced with the enemies they've faced before...and haven't...while trying to save Gotham, its people, and their own souls.

Collects Azrael: Agent of the Bat #40, Azrael: Agent of the Bat #47-50, Batman #554-562, Batman: Shadow of the Bat #73-82, Detective Comics #719-722, Detective Comics #724-729, Catwoman #56-57, Robin #52-54, The Batman Chronicles #12, The Batman Chronicles #14-15, Nightwing #19-20, Batman: Arkham Asylum - Tales of Madness #1, Batman: Blackgate - Isle of Men #1, Batman: Huntress/Spoiler - Blunt Trauma #1
Chuck Dixon's resume includes thousands of scripts for iconic characters like Batman, Superman, Green Lantern, Iron Man, the Punisher, the Simpsons, Spongebob Squarepants, G.I. Joe and many others. He is (along with artist Graham Nolan) the creator of the Batman villain Bane, the first permanent addition to the Dark Knight's rogues gallery in forty years, and for which he won 1993's Wizard Fan Award for best new character. His graphic novel adaptation of J.R.R. Tolkein's The Hobbit is a perennial bestseller worldwide. His unprecedented 100 issue run on DC Comics' Robin is considered to be a classic in the comics medium. Chuck's contributions to Marvel Comics' The Punisher are widely acknowledged as integral to that character's development.