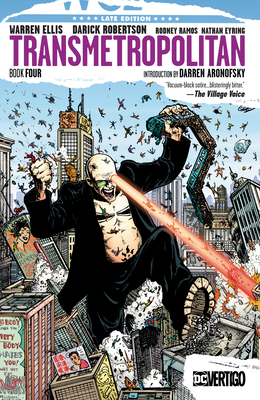 
Special Order—Subject to Availability
Renegade reporter of the future Spider Jerusalem continues his work speaking truth to power and exposing corruption even as his home in the City crumbles around him.

After losing his job, his bank account, and his home, renegade reporter of the future Spider Jerusalem has gone underground, the better to implement his plans to expose the evils of the government in the City. Then, all hell breaks loose as a nameless sniper terrorizes the Print District and a raging superstorm clears the streets of the City.

Collects Transmetropolitan #37-48, written by visionary writer Warren Ellis.
Warren Ellis is the award-winning writer of Transmetropolitan, Planetary, The Authority, and the writer and co-creator of the graphic novel RED, which was the basis of two major motion pictures.   He is also the author of the NYT-bestselling novels Gun Machine and Crooked Little Vein.  His newest publication is the digital short-story single Dead Pig Collector, from FSG Originals.

His awards and recognitions include the NUIG Literary and Debating Society’s President’s Medal for service to freedom of speech, the Eagle Awards Roll Of Honour for lifetime achievement in the field of comics & graphic novels, the Grand Prix de l’Imaginaire 2010, the Sidewise Award for Alternate History, and the International Horror Guild Award for illustrated narrative.

Ellis lives outside London, on the south-east coast of England, in case he needs to make a quick getaway.