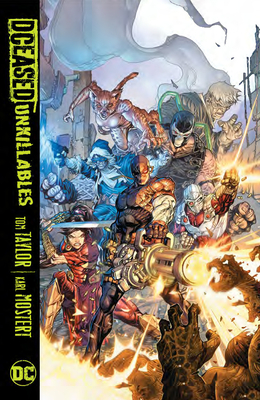 
Not On Our Shelves—Ships in 1-5 Days
Discover what the villains of the DC Universe did during the events of DCeased!

From the hit series DCeased comes a villain's story about survival during the zombie apocalypse!

Vandal Savage hasn't lived for thousands of years without being prepared. Seconds after the virus breaks out, he has already made contact and begun to assemble a team of people to help him ride out the end of the world. Some of the world's greatest mercenaries and fighters are brought to his side, all tasked to protect Savage. All Vandal can offer them is survival.

Collects DCeased: The Unkillables #1-6.
Tom Taylor is the creator of the Aurealis Award-winning graphic novel series The Deep (which tells the adventures of a multiethnic family of underwater explorers who live on a submarine). The Deep has been optioned by Technicolor to be turned into a 26-episode CG animated series. He is perhaps best known for the best-selling DC Comics series Injustice: Gods Among Us, Earth 2, Batman/Superman and his many Star Wars series. Taylor has written for DC Comics, Dark Horse Comics, IDW Publishing, WildStorm, 2000 AD and Gestalt Comics.