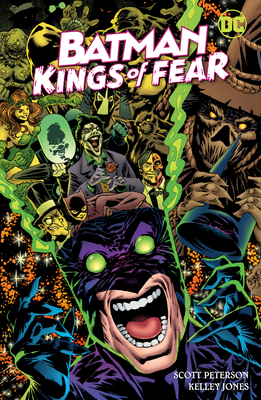 
Special Order—Subject to Availability
What is Batman's greatest fears?

When the Scarecrow orchestrates a riot at Arkham Asylum to conceal an escape, the chase will take the Dark Knight on a journey into the depths of his own mind.

Batman has faced Jonathan Crane’s fear gas before, but a dose of the Scarecrow’s new formula opens the hero to a world of self-doubt. Prodded by his enemy, Bruce Wayne’s deepest fears come to the surface, with one question inching its way to the top of the list: Would Gotham City be better off if there never was a Batman? And even as he wrestles with this question that strikes at the very heart of his life’s mission, Batman has to find the Scarecrow’s hostage, who may be more than he appears!

BATMAN: KINGS OF FEAR collects the full six-issue miniseries written by former Batman editor Scott Peterson (BATGIRL) with stylish art by the legendary Kelley Jones (THE SANDMAN, DEADMAN).
Scott Peterson joined the staff of DC Comics as the assistant of Dennis O'Neil in 1991. He worked as an editor of Batman-related titles from 1991-1998 and spent eight years as a freelance writer of comic books and children's books before returning to the editor's desk at WildStorm in July 2006.

During his years at DC Comics, Peterson edited such titles as Detective Comics, Green Arrow, Batman Black and White, Nightwing, and The Batman Adventures, including the Eisner and Harvey award-winning "Mad Love" by Paul Dini and Bruce Timm. Along with Dennis O'Neil, Jordan Gorfinkel, and Darren Vincenzo, Peterson was part of the Batman editorial team that developed the "No Man's Land" story line conceived by Jordan B. Gorfinkel in 1998.

Between 1999 and 2003 he wrote 42 issues of Batman: Gotham Adventures, a monthly comic book aimed at young readers, pencilled by Canadian artist Tim Levins. In 2000 Peterson was the co-writer, along with Kelley Puckett, of DC's first ongoing Batgirl comic book series.

Kelley Jones is a comic book artist best known for his work on Batman with Doug Moench and The Sandman with Neil Gaiman. A critically acclaimed artist throughout his career, Jones's recent work includes Swamp Thing: The Dead Don't Sleep with Swamp Thing co-creator Len Wein.