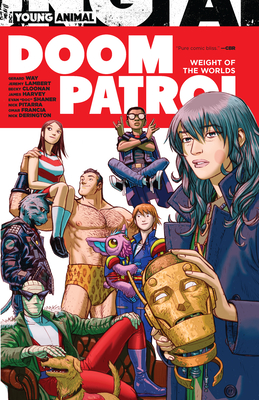 
Not On Our Shelves—Ships in 1-5 Days
Gerard Way and the World's Strangest Super Heroes return in an all-new series that takes them beyond the borders of time and space!

The Doom Patrol will go on an epic road trip around the solar system, facing off against the unusual and bizarre including the fanatical fitness fiends of planet Orbius and the Marathon Eternal. Big changes are coming for these unusual heroes, including Robotman coming to terms with his new life as a human.

Front man to My Chemical Romance and the author of The Umbrella Academy, Gerard Way is no stranger to strangeness. He's taken the Doom Patrol from within a gyro to the edges of the universe, and you can't wait to see where he'll take them next! Doom Patrol: Weight of the Worlds explores the fringes of a universe created by one of our generation's most unimaginable minds.
Gerard Way is the Eisner Award-winning writer of The Umbrella Academy and the comics miniseries The True Lives of the Fabulous Killjoys. He is the creative mind behind the new grassroots imprint DC's Young Animal, whose retro-inspired lineup bridges the gap between the DC Universe and Vertigo. Way is also widely known for his former role as the lead vocalist and cofounder of the alternative rock band My Chemical Romance.