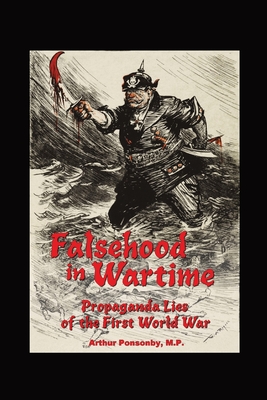 Falsehood is a recognized and extremely useful weapon in warfare, and every country uses it quite deliberately to deceive its own people, to attract neutrals, and to mislead the enemy. The ignorant and innocent masses in each country are unaware at the time that they are being misled, and when it is all over, only here and there are the falsehoods discovered and exposed. As it is all past history and the desired effect has been produced by the stories and statements, no one troubles to investigate the facts and establish the truth.

Lying, as we all know, does not take place only in war-time, but in war-time the authoritative organization of lying is not sufficiently recognized. Yet the deception of whole peoples is not a matter which can be lightly regarded. This well-known book by the Englishman Arthur Ponsonby, a member of the British Parliament, opens our eyes and shows us how politicians and journalists deceive and lie to incite people to war.

Anyone who applies the realizations in this book, originally published in 1928, to modern-day media reportage will see that we are still subject to this kind of manipulation from above, regardless whether our governments have openly declared war on the enemy of their choice, or not.