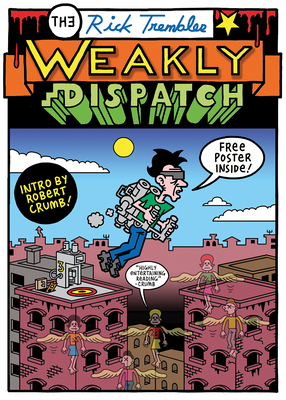 A pandemic time capsule by a celebrated underground cartoonist.

When COVID-19 hit Montreal, cartoonist Rick Trembles started The Weakly Dispatch, a series of diary comics offering his personal perspective on pandemic life. Trembles' asthma put him at risk of a serious infection so, like many people, he took careful measures to avoid coming into contact with the virus. He self-isolated for months, surviving on grocery deliveries from friends, DIY workouts (to prevent muscle atrophy), and of course, comics.

Leaving the apartment, however, turned out to be even harder than staying isolated. Initially foiled by stair-painters and coughing neighbours, Trembles quickly discovered a newly perilous world, populated by unmasked people and handshake enthusiasts.

The Weakly Dispatch is a wry and vulnerable look at the day-to-day complexities of life during a global pandemic, by the creator of Represented Immobilized.