What I Remember, What I Know: The Life of a High Arctic Exile (Paperback) 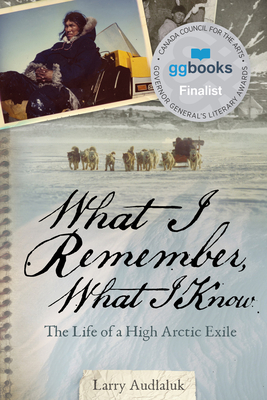 What I Remember, What I Know: The Life of a High Arctic Exile (Paperback)


Not On Our Shelves—Ships in 1-5 Days
Larry Audlaluk was born in Uugaqsiuvik, a traditional settlement west of Inujjuak in northern Quebec, or Nunavik. He was almost three years old when his family was chosen by the government to be one of seven Inuit families relocated from Nunavik to the High Arctic in the early 1950s.They were promised a land of plenty. They were given an inhospitable polar desert. Larry tells of loss, illness, and his family's struggle to survive, juxtaposed with excerpts from official reports that conveyed the relocatees' plight as a successful experiment. With refreshing candour and an unbreakable sense of humour, Larry leads the reader through his life as a High Arctic Exile--through broken promises, a decades-long fight to return home, and a life between two worlds as southern culture begins to encroach on Inuit traditions.