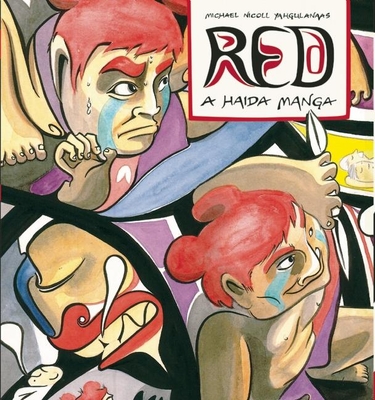 
Not On Our Shelves—Ships in 1-5 Days
Referencing a classic Haida oral narrative, this stunning full-color graphic novel documents the tragic story of a leader so blinded by revenge that he takes his community to the brink of war and destruction. Consisting of 108 pages of hand-painted illustrations, Red is a groundbreaking mix of imagery from the indigenous Haida culture and Japanese manga. Red is the prideful leader of a small village in the islands off the northwest coast of British Columbia. His sister was abducted years ago by a band of raiders, and when news comes that she has been spotted in a nearby village, Red sets out to rescue his sister and exact revenge on her captors. Tragic and timeless, it is reminiscent of such classic stories as Oedipus Rex and Macbeth. An action-packed and dazzling graphic novel, Red is also a cautionary tale about the devastating effects of rage and retribution.
Michael Nicoll Yahgulanaas is a visual artist, storyteller and public speaker. Born and raised on the north Pacific islands of Haida Gwaii, he melds his cultural and political experiences as an indigenous person with contemporary graphic literature to produce a unique genre called Haida Manga. His work has been enthusiastically received internationally and is published in Japan, Hong Kong, Taiwan, Macau, Spain, the United States and Canada (English and French). His books include Flight of the Hummingbird, A Tale of Two Shamans and Hachidori, a bestseller in Japan. He lives in Canada with his wife and daughter, close to the Two Sisters mountains on an island in the Salish Sea.