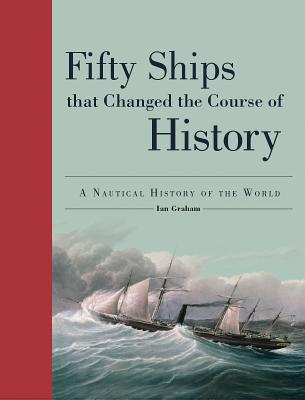 Fifty Ships That Changed the Course of History is a beautiful guide to fifty water vessels that played a key role in world history and had a great impact on human civilization. The book presents the ships chronologically, beginning with Pharaoh Khufu's Solar Barge from about 2566 BCE. The chapter includes a photograph of the reconstructed ship, discovered in 1954 near the Great Pyramid. Religious beliefs held that in the afterlife the pharaoh would need a ship to sail the cosmic waters of the sky with the sun god, Ra.

The book closes with another sun-seeking ship four thousand years later. The epitome of an ocean cruise ship, the MS Allure of the Seas is the biggest passenger ship ever built. An Oasis-class cruise ship, it is a destination in itself, complete with a Central Park-like oasis, 18 decks, 5,492 passengers, and a crew of 2,384.

Between these landmark vessels is a variety of ships used for all of mankind's needs, from hunters searching for food, traders with goods to barter and warriors bent on conquest, to explorers longing to see what lay beyond the horizon. Over time, the first small primitive watercraft evolved into bigger seagoing vessels, shaping our history, culture, and civilization along the way.

Some of the fifty ships are:

This attractive reference provides an innovative perspective on maritime and world history. It is an excellent selection for all collections.

Ian Graham is an author with more than 30 years' experience in popular science, technology and history. He has written extensively for magazines and has written and co-written more than 200 books on a wide range of topics, including space exploration, aviation, transport, energy, communications, inventions and military technology. He has also written crime fiction and graphic novels retelling classic tales. He has a degree in applied physics and a postgraduate diploma in journalism. In 2012 he was the joint winner of the Royal Society Young People's Book Prize and in 2014 he was shortlisted for the Educational Writers' Award.