Lawless: A Lawyer’s Unrelenting Fight for Justice in a War Zone (Paperback) 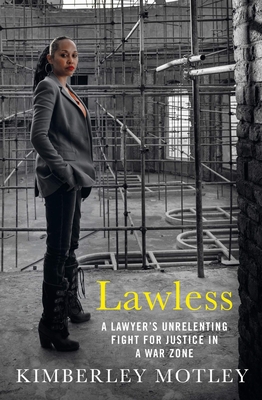 Lawless: A Lawyer’s Unrelenting Fight for Justice in a War Zone (Paperback)


Not On Our Shelves—Ships in 1-5 Days
In the summer of 2008 Kimberley Motley quit her job as a public defender in Milwaukee to join a program that helped train lawyers in war-torn Afghanistan. She was 32 at the time, a mother of three who had never traveled outside the U.S. What she brought to Afghanistan was a toughness and resilience which came from growing up in one of the most dangerous cities in the country, a fundamental belief in everyone's right to justice and an unconventional legal mind that has made her a legend in an archaic, misogynistic and deeply conservative environment. Through sheer force of personality, ingenuity and perseverance, Kimberley became the first foreign lawyer to practice in Afghanistan and her work swiftly morphed into a mission—to bring "justness" to the defenseless and voiceless. She has established herself as an expert on its fledgling criminal justice system, able to pivot between the country's complex legislation and its religious laws in defense of her clients. Her radical approach has seen her successfully represent both Afghans and Westerners, overturning sentences for people who've been subject to appalling miscarriages of justice.
Kimberley Motley is an international human rights attorney and former Miss Wisconsin who has made headlines around the world with her ground-breaking legal work. As the first foreign lawyer to practice in Afghanistan, her high-profile cases have included her work in returning three British children taken illegally to the country by their father. In 2015 she was the subject of the documentary film Motley's Law, which won the Grand Jury Prize Award at DOC NYC, America's largest documentary festival.
" An attorney shares riveting stories of practicing law in Afghanistan. . . . A compelling account of a flexible legal advocate in unusual circumstances." —Kirkus Reviews