The Art of Coalition: The Howard Government Experience, 1996-2007 (Paperback) 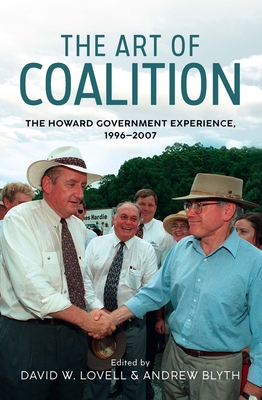 The Art of Coalition: The Howard Government Experience, 1996-2007 (Paperback)


Special Order—Subject to Availability
(This book cannot be returned.)
Despite being described as ‘a remarkably successful partnership’ by John Howard and a ‘triumph of trust’ by his counterpart, Nationals leader and Deputy Prime Minister John Anderson, the art of coalition government is a delicate (and sometimes difficult) balancing of policy, politics, and personalities. The relationship between the Liberal and Nationals parties ensured the Howard Government’s stability and provided a solid foundation for its legislative program between 1996 and 2007. While the Coalition partnership has been pivotal to Australian politics since the Second World War, under the Howard prime ministership—despite occasional tensions—the two parties changed key aspects of Australian life through gun control, telecommunications and taxation reform, and balancing the budget. In The Art of Coalition, Joel Fitzgibbon, Zareh Ghazarian, Tom Frame, Linda Courtenay Botterill, Paul Davey, Tony Abbott, and others convey the complexities of maintaining a strong political partnership, and the importance of trust in an effective coalition.
Andrew Blyth is a senior member of staff at UNSW Canberra. Andrew was a former chief of staff and senior adviser in the Howard Government. He holds an undergraduate degree in government and postgraduate qualifications in business and international relations. In 2012 he was awarded a Fulbright Professional Scholarship in Australia-US Alliance Studies. Andrew is currently researching the role and effectiveness of think tanks through a professional doctorate at UNSW Canberra. David W. Lovell is Professor in International and Political Studies at UNSW Canberra, and Director of The John Howard Prime Ministerial Library. Since 1993 he has been a member of the Executive Committee of the International Society for the Study of European Ideas, and was co-editor of its journal, The European Legacy, until 2017. He is a member of the Council for Security Cooperation in the Asia-Pacific (CSCAP). He has published a number of books in the history of political thought, post-communism, Asia-Pacific security, theatre, international humanitarian law, and Australian politics.