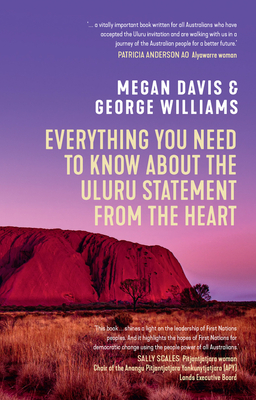 
Special Order—Subject to Availability
(This book cannot be returned.)
We leave base camp and start our trek across this vast country. We invite you to walk with us in a movement of the Australian people for a better future. On 26 May 2017, after a historic process of consultation, the Uluru Statement from the Heart was read out. This clear and urgent call for reform to the community from Aboriginal and Torres Strait Islander peoples asked for a First Nations Voice to Parliament protected in the Constitution and a process of agreement-making and truth-telling. Voice. Treaty. Truth. What was the journey to this point? What do Australians need to know about the Uluru Statement from the Heart? And how can these reforms be achieved? Everything You Need to Know about the Uluru Statement from the Heart, written by Megan Davis and George Williams, two of Australia’s best-known constitutional experts, is essential reading on how our Constitution was drafted, what the 1967 referendum achieved, and the lead-up and response to the Uluru Statement. Importantly, it explains how the Uluru Statement offers change that will benefit the whole nation.
George Williams AO is the Anthony Mason Professor and a Scientia Professor, as well as a Deputy Vice Chancellor at UNSW. He has published books including Australian Constitutional Law and Theory, The Oxford Companion to the High Court of Australia, and Human Rights under the Australian Constitution. He has appeared as a barrister in the High Court of Australia and is a columnist for The Australian. Megan Davis is a Cobble Cobble woman from south-west Queensland. She is Pro Vice-Chancellor Indigenous UNSW and the Balnaves Chair in Constitutional Law at UNSW Law. She was a member of the Referendum Council and the Prime Minister’s Expert Panel on Constitutional Recognition.
'This is the first authoritative book on the Uluru Statement from the Heart and a constitutional Voice. It is a must read for all Australians as the nation prepares for a referendum. It is a vitally important book written for all Australians who have accepted the Uluru invitation and are walking with us in a journey of the Australian people for a better future.’ —Patricia Anderson AO, Alyawarre woman

‘This book is the first comprehensive historical and contemporary story of the Uluru Statement and its place in the Aboriginal struggle for rights and recognition. It shines a light on the leadership of First Nations peoples. And it highlights the hopes of First Nations for democratic change using the people power of all Australians walking together and exercising our collective agency for change.’ —Sally Scales, Pitjantjatjara woman, Chair of the Anangu Pitjantjatjara Yankunytjatjara (APY) Lands Executive Board