And You Shall Be Heard: In the Courts of Law and Beyond (Hardcover) 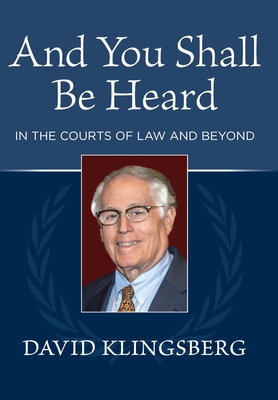 And You Shall Be Heard: In the Courts of Law and Beyond (Hardcover)

as a lawyer. To start court proceedings, the clerk announces that "all persons shall draw near and you shall be heard." The importance of being heard in order to achieve justice is a theme that is woven throughout this memoir.

Klingsberg describes his arguments in the U.S. Supreme Court as a pro bono attorney for prisoners on death row. He traces the ways in which the "shadow court" has treated the need to be heard particularly when a death sentence is at stake. He describes his role, as legislative attorney in the Justice Department, in drafting the second Civil Rights Act since the Civil War reconstruction. As an Assistant U.S. Attorney in the Southern District of New York, he prosecuted tax evaders, which he contrasts with current tax enforcement. As Chief Appellate Attorney in that office, he argued appeals against a Mafia kingpin convicted of narcotics conspiracy and the former head of the Communist Party indicted for conspiracy to overthrow the government. These crimes are contrasted with the exposure of those who conspired to attack the capitol on January 6, 2021.