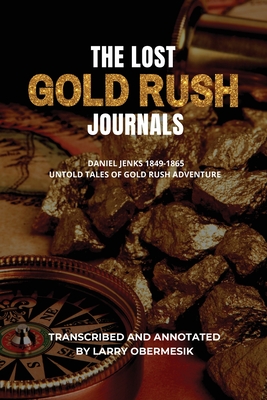 "One of the most vivid and best written gold rush journals we have ever handled." - Christie's Auction House

This amazing collection of Gold Rush journals were lost in the archives until 2021 and never published. It's a literary treasure that chronicles America's Gold Rush era in astonishing detail, and one of the most riveting first-hand accounts of California Gold Rush history ever discovered. Ride along with Daniel Jenks on his cross-country California Gold Rush Odyssey, and see what it was really like to be a '49er during the Gold Rush Days.

The Jenks Journals are Wild West Storytelling at its finest, rich in the color and singular culture of those California gold rush boomtowns, and it's delivered to us in the Argonaut's own words. Writing to an "imaginary confidant", Jenks shares his inner-most thoughts with the reader - the dreams and fears that drove him.

When he first arrived at the San Francisco Gold Rush in 1849, Jenks was a lanky 21-year-old Greenhorn with no marketable skills. Years later he'd be elected Constable of Yreka Township and become an important figure in Yreka history.

In 1852 Jenks arrived in Yreka California where he mined for gold on Long Gulch, worked as a Steward, tried his hand at being a Drover and survived the Northern California & Southern Oregon Indian Wars. In 1857 Daniel sold his Long Gulch gold mining claim and returned home to Pawtucket, Rhode Island. In 1859 the Colorado Gold Rush drew Jenks westward again. After concluding the Pikes Peak Gold Rush was all a humbug, Daniel returned to Yreka.

For over 150 years Daniel's remarkable collection of gold rush stories remained undiscovered. From Native Americans to Chinese Gold Rush miners and Vigilance Committees, Jenks wrote of that extraordinary chapter in American history like few others have.

And now, for the first time ever, you can finally read Daniel's untold tales of gold rush adventure yourself