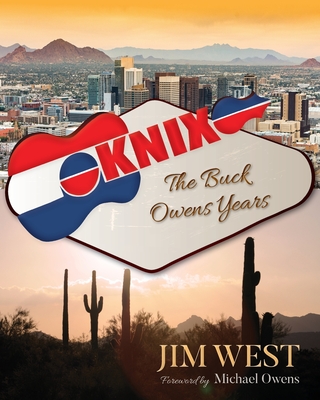 Imagine a radio station so successful that an entire nationwide music industry admired, celebrated and honored it as a "benchmark" of excellence for all other broadcasters to emulate. Imagine a radio station that countless air personalities set career goals to work at and never wanted to leave? A station so intimate that dedicated listeners become emotional with memories of their favorite air talent making a difference in their lives and made to feel like "family." An award-winning station committed to its community. A ratings juggernaut that was number one for over a decade. And a place where aspiring country singers who became BIG stars knew they had "made it" when their music was added to its playlist

KNIX-FM in Phoenix, Arizona is that station.

Country music Hall of Famer BUCK OWENS purchased the station in 1968 and owned it for nearly 31 years.

So many great stories, so many lasting memories. Former Air talent and Program Director R.J. Curtis once said, "Getting a job at KNIX was like winning a Rhodes scholarship, no matter where you were after that you could arguably say that you worked at the finest Country radio station in America."

﻿Of the 15,000 or so FCC licensed radio stations in the United States there has always been a handful of iconic radio signals that became well known and super served their communities. Many were pioneer stations establishing themselves during the infancy of the radio spectrum. Some great call letters come to mind; WABC, WLS, KOA, KFI, KMOX, WSM, KOB, KOMA, KOY and others.

Out in the desert southwest there was one station that would grow to become a ratings juggernaut. That station was KNIX-FM in Phoenix, Arizona. The station has quite a storied past. But its popularity with listeners did not happen overnight

Original owners John and Donna Karshner and young son signed the station on the air in December of 1961 with only 3100 watts and a beautiful music format. It was obscure and floundered at the bottom of the local radio ratings as not many people owned FM radios then. On weekends the station had instructional programs on how to speak French and German

The true timeline for the station's success starts with the emergence of a country singer who had migrated west from Sherman, Texas with his family when he was a child. Alvis Edgar Owens Jr, better known as Buck Owens, was 8 years old in 1937 when his struggling family joined the migration of "Okie" and "Texans" escaping the dust bowl that plagued that area during the Great Depression. Their intended destination was the promised land of California. However, a broken trailer hitch had them settling with relatives in Mesa, Arizona a suburb of Phoenix for several years.

In the 1940's young Buck began performing in roadhouses and dancehalls in Arizona, even had his own local radio show with a partner. He was not paid, because he was paying his DUES