Pluck: Lessons We Learned for Improving Healthcare and the World (Hardcover) 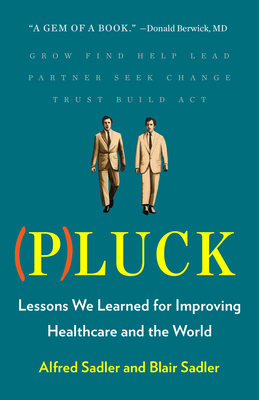 Pluck: Lessons We Learned for Improving Healthcare and the World (Hardcover)

50 years ago a uniform organ donation law had not been enacted, the physician assistant wasn't a profession, bioethics wasn't a field, and emergency medical services was a hearse or a painted station wagon with a driver who had inadequate medical training, and 9-1-1 didn't yet exist.

From 1967 to 1976, Alfred Sadler and Blair Sadler, a doctor and a lawyer, who are also twin brothers, collaborated on major decisions and laws which had multigenerational and lifesaving impacts in our country including:

✓ The birth of the brand-new physician assistant profession

✓ The emergence of bioethics as a core principle in healthcare today

In Pluck, the Sadlers share their extraordinary story of helping to create change in four different areas of healthcare in just nine years, while working at the National Institutes of Health, Yale University Medical School, The Hastings Center on Bioethics, and the Robert Wood Johnson Foundation.

The book also highlights 15 lessons for catalyzing change that endure and are relevant today. Pluck will inspire, motivate, and educate the next generation who are committed to making positive changes in our world.

Alfred and Blair Sadler worked as a medical-legal team from 1967-1976. During that time, they held positions at the National Institutes of Health, on the faculty at Yale University School of Medicine, as senior officers at the Robert Wood Johnson Foundation, and were Founding Fellows of the Hastings Center on Bioethics. Together they helped draft the Uniform Anatomical Gift Act in 1968 which was adopted by all 50 states and provides the legal framework for the national network of organ sharing that we have today. In addition to collaborating on their latest book, Pluck, they co-authored The Physician's Assistant: Today and Tomorrow in 1972 and Emergency Medical Care: The Neglected Public Service in 1977.