The Founders' Speech to a Nation in Crisis: What the Founders Would Say to America Today (Paperback) 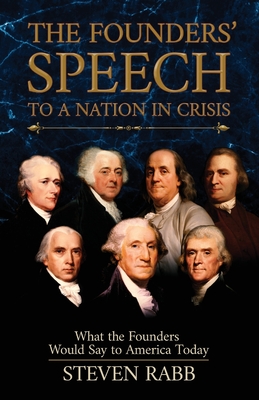 The Founders' Speech to a Nation in Crisis: What the Founders Would Say to America Today (Paperback)


Not On Our Shelves—Ships in 1-5 Days
Readers who want to better understand the founding principles of America, as expressed in the words of the Founding Fathers, will love this book. In developing "The Founders' Speech to a Nation in Crisis," author Steven Rabb spent two years compiling the words of the Founding Fathers into narrative form, weaving their texts into a single powerful speech to America. His purpose was to give depth to the conversation happening in America today about America's founding ideals. In so doing, Steven has also created a single source of "Best of" quotes from the Founding Fathers that will be read and re-read for generations to come.In a work described as "The best single source for the understanding of America's Founding," and reviews such as, "This book nearly made me stand and cheer " author Steven Rabb has created a powerful read through the synergized writings of America's Founding Fathers. Through their words, Steven has demonstrated with amazing clarity the continuing relevance of America's founding ideals, and their resonance for our nation today. Framing the work as a reunion between the Founders in contemporary America, Steven gives voice to their views on modern-day issues from religious liberty and the rule of law to freedom of speech and the continuing threat of tyranny. "The Founders' Speech to a Nation in Crisis" is a tapestry of the Founders' own words written in ten chapters and woven into a single, powerful speech and call to action for every American. The first few chapters remind readers of the God-given rights of man, along with the virtues and duties required in a people who seek to retain them. Through the writings of George Washington, John Adams, Alexander Hamilton, James Madison, Thomas Jefferson, and many of their contemporaries, the speech builds as the Founders caution against the threats to liberty from unbounded power and unrestrained majorities. The continuing relevance of our Founders' words - as revealed in this unique, meticulously crafted work - is a clarion call to defend our natural rights that will stun readers and leave them celebrating America's founding and founding fathers. As one reviewer stated: "I am a humble guy. A high school educator. A craftsman. A successful small business operator. Certainly not a scholar. Your book made my heart leap with excitement. We as a nation have fallen so far, but this gives me hope we can turn this immense vessel around. So glad this came across my radar. So many of my friends and fellow believers are going to have their own copy arriving very soon After-dinner discussions this Thanksgiving? Yes sir, your book."