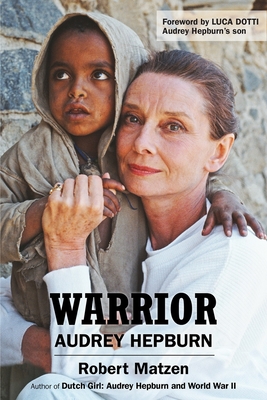 
Not On Our Shelves—Ships in 1-5 Days
“UNICEF thought that with my mother they would get a pretty princess to show up at galas. What they really got was a badass soldier.” – Luca Dotti, Audrey Hepburn’s son. Warrior: Audrey Hepburn completes the story arc of Robert Matzen's Dutch Girl: Audrey Hepburn and World War II. Hepburn's experiences in wartime, including the murder of family members, her survival through combat and starvation conditions, and work on behalf of the Dutch Resistance, gave her the determination to become a humanitarian for UNICEF and the fearlessness to charge into war-torn countries in the Third World on behalf of children and their mothers in desperate need. She set the standard for celebrity humanitarians and--according to her son Luca Dotti--ultimately gave her life for the causes she espoused.
Robert Matzen is the internationally bestselling author of Dutch Girl: Audrey Hepburn and World War II, Mission: Jimmy Stewart and the Fight for Europe, and six other books. He has appeared on broadcast programs around the world and his byline has appeared in the Wall Street Journal, among other publications. Luca Dotti is the son of Audrey Hepburn and Italian psychiatrist Professor Andrea Dotti. Luca is co-author (with Luigi Spinola) of the New York Times bestseller Audrey at Home: Memories of My Mother's Kitchen and two other books. He has long been involved with the Audrey Hepburn's Children's Fund, which helps children in need around the world.
"Matzen meticulously researched Hepburn’s UNICEF years and worked closely with her son, her friends, UNICEF staff, journalists who covered her trips, and military personnel who met with and greatly admired her. VERDICT Hepburn’s empathy and bravery shine through; a must-read for both history buffs and Hepburn fans." —Library Journal

"A must-read at a time when income inequality, racial justice, climate change, women’s rights and the global refugee crisis have never been more newsworthy, Warrior is an original and gripping work of celebrity biography that will turn the world’s perception of this film and fashion icon on its head, and inspire a new generation of fans." —We Are Movie Geeks


"Drawing upon meticulous research, Mr. Matzen delivers a vivid, moving and persuasive account of a harrowing time that the actress seldom discussed in detail and which has been glossed over or sensationalized by frustrated biographers." —The Wall Street Journal


"Visceral details—of intense privation, bombings, and also acts of resistance—evoke the period. Matzen has created a vivid portrait of a civilian population under siege—one of whom just happened to become a Hollywood star." —Publishers Weekly


"A meticulously detailed and researched look at the formative years of an iconic performer; for fans of Hepburn as well as anyone seeking a social history of the Dutch experience of World War II." —Library Journal


"A master storyteller, Matzen has given us a great story—intimate, intense, and unforgettable—that carries us not only into the heart of the battle but into the heart of a great human being." —Foreword Reviews


"[Dutch Girl] offers a wonderfully complete and revealing character sketch of an individual who continues to fascinate millions around the world. Hepburn was, of course, gracious, talented, and elegant. But Matzen makes clear that she also was extraordinarily courageous." —The Christian Science Monitor

"What Matzen also does well is communicate the physical and emotional toll the role had on Hepburn. The book describes her pain at seeing the people suffering, especially the children, as she visits Baidoa, the “city of death” that had been affected severely by the civil war, while she was in agony from a disease that, four months later, would see her dead of abdominal cancer. A warrior indeed, and this book does her tale justice." —Charlie Brigden, Set the Tape

"As Matzen reconstructs in his book, Hepburn worked tirelessly to help as many children across the globe as humanly possible. To 'give a voice to the voiceless.' Matzen digs deep into the story of Warrior and provides an overwhelming amount of research to back up events and off-handed comments." —Michael J. Casey, book reviewer