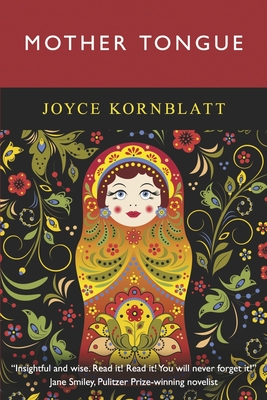 
On Our Shelves Now at:
Mother Tongue begins with a shocking discovery. In a powerful fiction that reads like a true story, the details of the crime and its aftermath unfold.

In mid-life, Australian fiction-writer Nella Pine learns that she was kidnapped as an infant from a hospital in the United States, taken to Australia, and raised there by the woman she knew as her mother, but who was actually her abductor. "When I was three days old, a nurse named Ruth Miller stole me from the obstetrics ward in Mercy Hospital and raised me as her own."

In four voices of those whose lives were changed forever by the abduction, the mystery of Nella's kidnapping emerges. Why was she taken? How was the secret kept for so long? What became of the family she was stolen from? Mother Tongue invites the reader to participate with these memorable characters as they unfold the impact on them of a terrible crime.
Joyce Kornblatt lives and writes in the Blue Mountains. An American-born novelist who moved to Australia in 2003, she is the author of four well-reviewed novels: Nothing to Do with Love, Breaking Bread, White Water, and The Reason for Wings–which have been published in the U.S., England, France, Denmark, and Germany. Her short stories, essays, and book reviews have appeared in publications such as The Atlantic Monthly, The New York Times, The Washington Post, Georgia Review, Iowa Review, and The Sydney Morning Herald.

For twenty years, she was a Professor of Literature and Creative Writing at the University of Maryland in the U.S. In Australia she has taught and supervised post-graduate writing students, been a tutor at Varuna Writers House, and mentored a number of award-winning Australian writers. For many years, she has offered writing retreats and year-long private workshops in Sydney.

Joyce Kornblatt lives in the Blue Mountains, Australia, near Sydney, with her husband, Christopher Ash.