Nothing Left to Prove: A Law Enforcement Memoir (Hardcover) 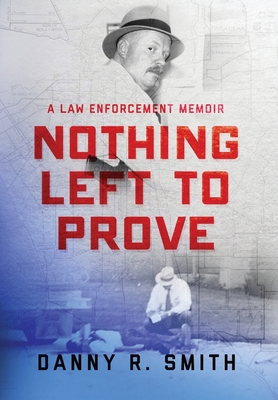 Nothing Left to Prove: A Law Enforcement Memoir (Hardcover)

"The sharp, hardboiled prose you would expect from a detective novelist... Smith shares vivid details, hard-earned insights, and stories of courage and terror, told with crisp, raw dialogue, a feeling for the drama of potentially violent confrontations, and an undercurrent of despair, despite many heartfelt tributes to cops he trusted and the mentor whose murder he had to look into." - BookLife Review

He landed his dream job pursuing the guilty, but two decades of horrific violence and a steady stream of death left him scarred...

From the streets of South Los Angeles to the elite homicide bureau, former sheriff's detective Danny R. Smith saw some of L.A.'s darkest hours: a crack cocaine epidemic, unprecedented gang warfare, a spike in homicides that stunned the nation, the Rodney King riots.

A beating left him unconscious. Only the miraculous malfunction of a killer's automatic weapon saved his life. But it was the hundreds of deaths and innumerable tragedies-murdered colleagues, dead kids, a Native American burned alive by skinheads-that took the greatest toll.

In this no-holds-barred memoir, Smith offers a rare, unfiltered view of a career in law enforcement, and reveals his unique insights into battling PTSD and being forced to leave the profession he loved.

Nothing Left to Prove is shocking, riveting, and poignant-remarkably honest. It's the very personal story of one man's career and its effect on his life, unveiled through Smith's masterful storytelling. If you think you know cops, if you enjoy compelling true-crime stories, then you'll love Danny R. Smith's powerful narrative.

"Danny R. Smith has told his story with open and raw emotion that few would be willing to share openly and with such brutal honesty. His story leaves the reader with a better understanding of the hardships that a career in law enforcement can take on one's life, and hopefully leaves society with a better appreciation of those who chose to protect us." - Andrea Self

"Nothing Left to Prove is a gritty, gut-wrenchingly honest and compelling inside look at the life of a law enforcement officer. This author pulls no punches as he lays bare the violence and horrific atrocities that took place during his career."- Heather Wamboldt

"I was at times, shocked, appalled and repulsed by what one human being could do to another human being. I was also amazed, appreciative and extremely respectful of those who serve so resolutely to protect others." - Michele Carey

"This is an outstanding, exciting, and superbly readable account from a man who lived it all. Poignant, gut-wrenching, and, at times, amusing, this is definitely an unputdownable narrative." - Michele Kapugi

"Takes you through the life of a true and dedicated street cop. Fascinating read " - Kay Reeves