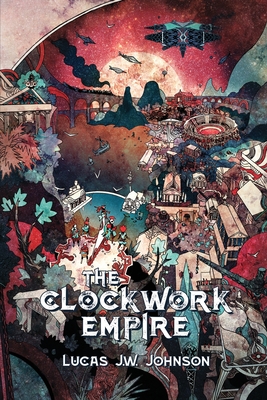 Publishers Weekly: "A thrilling steampunk adventure" with "ambitious worldbuilding." "Fans of steampunk and alternate history will lap this up."

Geek Girl Authority: "If you're looking for queer characters fighting fascism in a steampunk world, The Clockwork Empire is perfect."

It is the height of the industrial revolution, and the Roman Empire has stood for thousands of years. Airborne fortresses and mechanically remade soldiers guard against threats outside the empire's vast borders-even as it rots from the inside.

As an ambitious senator rises to power, and a mysterious agent plots the downfall of the gods, a motley crew of exiles assembles to stop the rising fascism of the state: an excommunicated Praetorian Guard, her remade muscle, a spy, a pilot, an ex-slave, and a noble boy disgraced, experimented on, and remade with a clockwork heart.

But smashing an authoritarian state is no simple fistfight in a taverna. Nor can one easily repair a machine that has been rusting for so long. As oppression takes hold across the Empire, the crew must find each other, find their fire, and find the agent known only as Servius-before he leads the world to destruction.